Tony
October 7, 2006
So Heather had only contacted us a month or so before her wedding, and seemed quite anxious and emphatic about having photos for her wedding. An easy-going bride, it didn’t seem like much of anything rattled her, and that proved to come in handy on her wedding day.
Heather has two children, a boy and a girl, who were in the wedding. Her son was the ring bearer and her daughter the flower girl. Both children seemed to understand that this was a special day, but like all children they got bored very quickly and didn’t want to keep being pretty and proper. 🙂

Heather ran late getting to the church for her 12:00 ceremony. We later learned that the reason was that there was some confusion with her reception site (Clarion Inn in Shepherdstown) and things had to be quickly rearranged to accommodate the reception, DJ and cake table.

One thing I love about weddings is flowers. Lots and lots of flowers. And this wedding was filled with roses. I love roses especially because the fragrance is so alluring and the petals are so soft. I’m sounding more manly all the time, eh? 😉
So the ceremony got a late start, but nobody seemed to care. We’ve long told brides that it doesn’t matter if they are running late – everything waits for them. She took that well in stride and walked proudly down the aisle with BOTH her parents to her waiting groom.
Once at the reception, things went smoothly. The DJ kept things going and dinner was served on time. The staff at the Clarion was, as usual, very helpful. 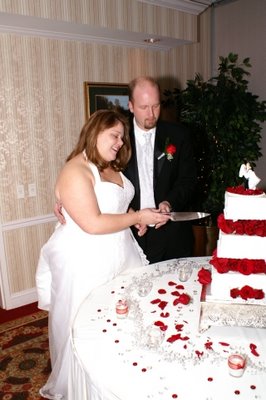 We want to wish Heather and Rusty a long and happy marriage.

So after about a month without any weddings, at least those where I’m the photographer, I got back in the saddle with one that was one of the most interesting I’ve done in awhile.

I started off by visiting the ceremony room, and the beauty of it all was eclipsed by some of the most interesting decorations. The theme was Venice.

The girls all got ready in a small room above the carriage house, and the oddest part about this was the chair sitting in the bathtub. The explanation was that since the mirror on the wall next to the tub was the best in the room that the chair was there so they could sit down to apply their makeup. Made sense to me.

This was an unusual wedding in that the groom had a lady as part of his party… It’s not the first time I’ve seen a female groomsperson, but the first one where her attire matched the groomsmen’s attire, only she wore a dress.

A little “side item” was a very interesting crush that was going on between the ring bearer and the older flower girl. Both were about 8 or 9, and it was cute to see the ring bearer bringing her flowers, dancing with her and everyone taking pictures of every move.

The party was pretty big… which means that there were a lot of people dancing, and I’m not sure I saw the bride leave the dance floor more than a few minutes at a time. At one point, even I was dragged on to the dance floor in a kind of “dance challenge” where each person who goes to the dance floor drags another person who is supposed to try to outdo what they did. Because I had two cameras on me, I did the only natural thing and did the cabbage patch with my primary camera. Hey, I was working, but I was also letting them know that I wasn’t a wallflower. 🙂

Here are a few more images from the wedding, a beautiful affair at the Purple Iris in Martinsburg.

We haven’t known Greg Sanchez a long time. But in that time, we’ve learned some of his quirks and a few of the reasons he seems a bit of a “spaz.”

This time, we were guests at a wedding. The second time in a month. Wow. I could get used to this! To actually take my time eating a nice meal without having to worry about if I need to pick up my camera and get the kid’s cute moment or the bride belly-laughing at Uncle Bob’s latest bawdy joke. But the best part was getting to dance with my lovely wife. We don’t get to dance much… so having the chance to do so twice in a month was wonderful!

Anyway… so we get to the church and find a parking spot… who knew? In the church’s lot… great. People, you have GOT to get to a wedding 30 minutes before the service. You get better parking, people don’t stare at you for arriving just before the service, and you get a great seat. We did.

It isn’t the first time I’ve heard popular music at a wedding. There was no church organ, no piano, no wailing singers, no choir. Just popular music… it was nice. The ceremony, as expected, was even entertaining… leave it to Greg to have a fun ceremony. Jessica was beautiful as always, graceful and elegant. They always seem so mismatched – but just keep reading.

Their exit song was “Signed, Sealed, Delivered” and this IS the first time I’ve ever seen the guests clap in rhythm with the exit song. And I’ve seen a LOT at a wedding. They knew they’d created quite a stir and were laughing all the way out.

So we headed to the reception. Oddly, I think we were the first ones there. I’m not really sure why. We didn’t leave first, and there was no “wait and throw bird seed or blow bubbles at them.” So, we just got there early.

The theme and colors were red and white. This meant red and white flowers (mostly roses and carnations, with some lilies thrown in), red tablecloths and white chair covers. They went slightly beyond that. The lights that surround the outside wall were alternated with red and white lights. And when Greg and Jessica were introduced, the bridal party all came in with hats and red/white boas. And don’t get all sexist here… in some cases, the girls wore the hat and the guy wore the boa. It was a cute display… obviously well choreographed.

Dinner was great… Greg is a big turkey and dressing afficianado, and so that’s what I ordered. It was very yummy. And we danced… not as much as at Zach’s wedding, but we did dance.

Oh! And I won the centerpiece! It was a really nice clear vase with red stone marbles and all those lovely flowers. Needless to say, Diana got the flowers. I kept the vase. 😉

It was very nice. There were some fun and funny moments. And yes, we watched the photographer work and made comments on his style. Greg says there are some good pictures of us from his wedding… I don’t think I’ve seen them yet. 🙁

Since updating our website to something that’s a bit easier to use and a lot easier to view, we have also been able to add some new features that we previously could not easily implement.

The first new feature is Check Your Date! This gives brides an opportunity to see if we are available on their wedding date before they call. Often times calling means leaving a voice message and waiting for a day or more (like on the weekend) to find out if we’re available. This feature at least gives them the opportunity to see if we have an opening for their wedding date. Now if we’re booked on their date, they don’t lose time looking for a photographer elsewhere. We just wish we could do all the weddings we get calls for.

The other new feature is an online gift registry for wedding couples. We started our Bridal Gift Registry last year and it has been a big hit. Now we’ve added the ability of friends, family and others to add value to your registry card by just going to the Gift Registry section of the Weddings page. We can also add brief instructions for adding to a gift registry on your Save The Date cards, which we can print from your engagement portraits!

We’re trying to make things easier. Coming into wedding booking season, it is important that people are able to get as much information as quickly as possible.

As previously posted, Zach worked for us for quite awhile. He mostly shot sports, but also was a second shooter at one of my weddings, did a lot of work around the studio, and in general was a good employee to have around.

He got married today. It was the first wedding we’ve been to in quite awhile where we weren’t working or helping out. As I said in the Ernesto post, it was raining most of the day, but nobody really seemed to care.

The ceremony was very nice. Zach’s grandfather, a minister, performed the majority of the ceremony. He did mispronounce Danielle’s name a few times, but nobody seemed to mind… the moment was too precious to worry about whose name was being said a little differently. And, as expected, Zach stumbled over his words a few times. I half-expected him to say “kiss it” when people were laughing at his miscues. But all well well, he behaved, and the ceremony was done.

On to the reception. I like pretty receptions. I like receptions where you know that it’s going to be nice, but you don’t want it to be garish (look it up). This was just that. Simply stated accents, nice attention to details, and a lot of fun. Brandy, also a former employee (why do people keep leaving us?) rode up with us and sat with us at our assigned table, which we shared with some of Zach’s college buddies. We didn’t see a lot of Zach, but he did stop by a few times, and Diana got a nice shot of me, Zach and Brandy (L to R, below). 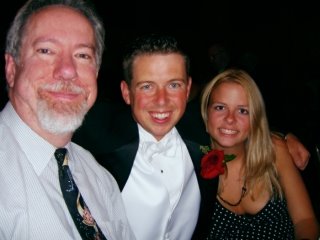 The highlight of the evening was Zach donning a helmet and rope (spelunking gear) to go after the garter on Danielle’s leg. She was in hysterics the whole time, and the crowd got a big kick out of it. Typical Zach, adding some fun and zest to keep things going.

The dance floor was full most of the time we were there. In fact, we danced the last dance of the evening and gave Zach a last hug as we were leaving. I told him I was proud of him… he’d grown up a lot in the last couple of years. I hope we stay in touch.

Best wishes to Danielle and Zach… they are honeymooning in Antigua.